I don't know what a Goatbox is or why a Goatbox may be rebellious. I can imagine a goat in a box might be quite the rebel having been kept in a box rather than in a field or on a hill. However, ultimately this is unimportant as I am writing about a band, not a goat's quality of life. So here are a new band I've been lucky enough get some music from...

When listening to the EP "Let Us Bleed Integrity" I thought the best way I can describe this sound is dirty, bluesy hard rock with a punk like delivery at times. The general sound is heavy enough but also tuneful and catchy enough to be accessible to fans of multiple genres.

They are made up of  Ivan Westley on Vocals and Guitars, Nate Anton on Drums and Colin James Gibson on Bass. Whilst originally from Montreal they are based in Toronto, which is good for me as I can now have a positive association with the place rather than the memory of visiting the CN tower as a child and my Dad forcing me to walk across the glass floor whilst I was shitting myself and blubbering.

Let Us Bleed Integrity is book ended with two tracks that are brilliant for different reasons. The opener Black Tooth Grin, is a balls out party track. Pantera fans may find themselves harking back to the Vulgar Videos with the songs subject, as I did. It's fast paced with a catchy riff, some fantastic, almost psychotic, drum fills and the bass parts have plenty to add to the rhythm of the track.

The last track, Icarus, offers more stylistically than anything else on the E.P. Seamlessly and fluidly it travels from a proggy intro into the catchy dirty rock riffs they seem to do so well, capturing some metal influenced breakdowns along the way, with a great and not overdone solo to boot.

So whats the filling in this sandwich of fuzzy rock brilliance? 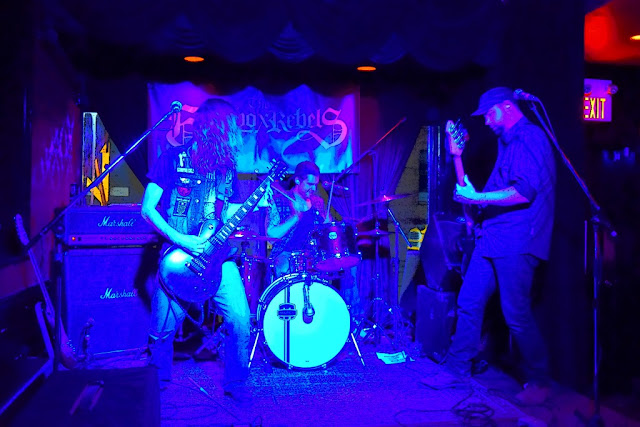 No Love Lost is an all out assault, fast paced and aggressive. It carries more of a punk/hardcore vibe than the rest of the tracks but manages to stay firmly in the heavy blues rock scope. Punchy and to the point with a chorus made for group participation, it's a track that should go down well with a live audience.

Opium Dozer, like No Love Lost, is another brilliant kick in the teeth of raw rock and attack. It has a sublime Doomy outro which is a direction I'd like to hear these guys expand on as they clearly have an ear for it, but I'm bound to say that, being a Doom head.

What I like about the E.P other than the music is the mix and production. It manages to keep a raw live, but at the same time you can clearly hear every instruments input. It's so good to here the nuances of the bass playing for instance, which is played brilliantly throughout. Whilst being raw and dirty in delivery, all the musical input sounds great from all three performers.

Overall this is a great release with 4 very strong offerings, two of which slightly edge it for me into the realm of excellence.

You can it here through Bandcamp, who as my readers know, I feel is a great place to purchase music and support artists. If you like what you've read/heard give it a spin and also follow them on Facebook or Twitter. Cor more info about them and their live shows check out their website.